All About the One-Acts 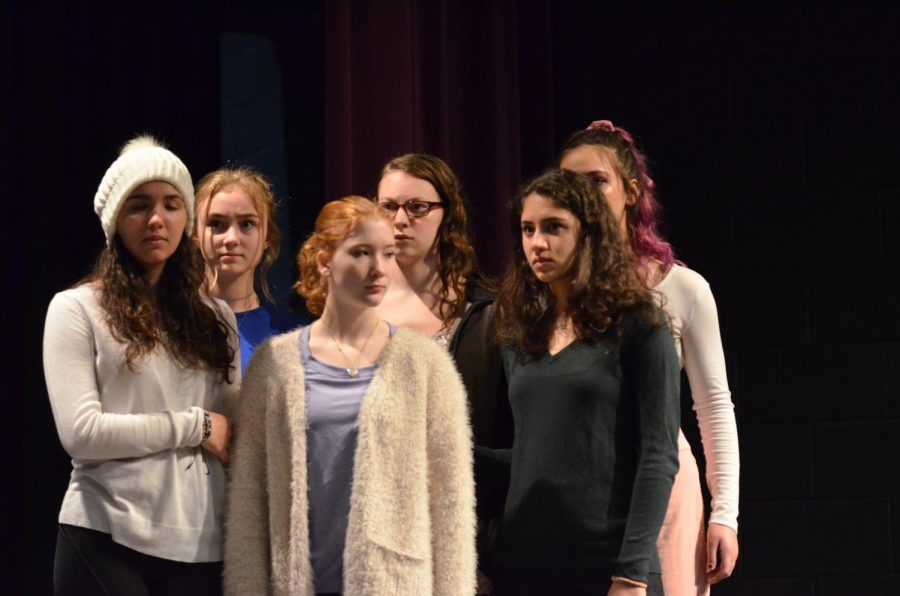 This weekend, the PFHS theater department will be putting on their annual one-act performances, which compiles multiple short plays directed by students.
The annual student-directed one-acts are a PFHS theater department tradition which involves a series of one-acts (short plays), which are directed by students in the Theater 4 class. This year, there are five one-acts, each directed by a student, all five of whom were in charge of selecting a script, casting actors to play characters in their one-act, and directing the production. The five directors, seniors Andreas Borgh, Avianna Hoffman, Becca Lipshultz, Madison Ruiz, and Trinity Lohr, although they have only directed a few rehearsals so far, all feel excited and optimistic about their upcoming performances.

Senior Andreas Borgh’s one-act, titled “Sure Thing”, is the story of two characters, one called Bill and the other called Betty, who meet in a coffee shop. Throughout the act, Bill attempts to sit with and talk to Betty, but fails. However, each time something goes wrong, a bell rings and the scene starts over. Through a series of unfortunate mishaps that result in the scene restarting each time, Bill works towards his goal of flirting with Betty.

Borgh was inspired to choose this script by recent PFHS graduate Robert McNickle, who suggested it to him when Borgh was having trouble finding a comedic script to his liking. After deciding on the script, it was time to cast the actors.

“I chose my actors based on their comedic timing and chemistry they showed on stage,” said Borgh. “They both are wonderful and talented people.” Borgh is excited for his performance, and is glad to be able to take part in this event overall.

“The one-acts always really bring people closer together,” he said. “It’s when I feel that people really bond and make friends in the department.”

Like Borgh, Avianna Hoffman chose her script after a friend recommended it to her.  Her one-act is called “Words, Words, Words!” – a well-known line from Hamlet which immediately gives off the tone of the performance.

Her script involves three main characters: a group of monkeys trying to write Hamlet for a science experiment. It follows a humorous plotline that Hoffman hopes will give the audience a laugh. “I’m excited for people’s reaction when they realize my actors are monkeys,” said Hoffman.

As a director, Hoffman is taking a laid-back role, giving her actors relative freedom to embrace the characters in a way that feels right to them. She enjoys collaborative work with her actors and stage managers, sharing her ideas with them in order to enrich the show.

“The rehearsals are going so well!” said Hoffman. “Right now we are working on character work, so we are doing different activities that are fun but also helps them develop their characters.”

Hoffman, although slightly nervous for the performance, feels excited and believes in her actors. “I’m excited to showcase the hard work from my actors,” she said.  “but I’ll always be nervous before any performance. I know they’ll do great though!”

Senior Becca Lipshultz’s one-act, titled “Cagebirds,” also involves animals as the main characters, although hers leans a bit more serious than comedic. The act focuses on a character named Wild One, a bird from outside who has been recently caged. Throughout the act, Wild One works to convince the other caged birds to escape with her.

Lipshultz has known that she wanted to use this script for years – in fact, she realized that she wanted to direct this script when she read it for the first time in class during her freshman year. “It’s kind of a strange script,” she said. “You have to really watch and listen to what’s going on or you might not understand the point of the dialogue.”

Lipshultz is pleased with her cast, and feels that they are going to be able to work together to create a great show.

“[Rehearsals have gone] really well so far!” she said. “I think that I have such a talented group of actors and I can’t wait to see where they take the show.”

Senior Madison Ruiz’s one-act is called “Poof!”, a lighthearted name for a darkly-humorous script. In the opening scene, the main character, Loureen, is fighting with her abusive husband, and without warning he bursts into flames and completely combusts. Throughout the act, Loureen has to deal with the aftermath of this event and receives support from her friend, Florence, to figure out the next step.

“It [has] a dark sense of humor in something tragic and all too common,” said Ruiz.

As for the performance itself, Ruiz is most excited about the visual aspect of the show. “Acting & coaching actors is fun,” she said. “but I love the blocking, costumes, et cetera more.”

Ruiz enjoys watching theater performances more than she does performing or directing, and is focusing on making her one-act an enjoyable experience for the audience as well as the actors. “I try to work how the audience will see it into how I work,” she said. Overall, Ruiz is excited and passionate about the upcoming performance, and feels optimistic about her one-act so far.

“My cast are amazing actors and I have no doubt that they’ll do great,” she said. Like Ruiz’s one-act, senior Trinity Lohr’s script, titled “Death of a Gerbil”, deals with dark themes. The script involves a man named Darren Gerbil, who is dead but doesn’t know it, and goes on an adventure to figure out what is happening to him.

“[Lohr chose her script because] she found it funny and intriguing, and had a vision for how it could be portrayed,” said Lohr’s PSM, Rachel Beach.

As a PSM, Beach is in charge of assisting Lohr in any way she can during rehearsals, and is excited to see how the performance turns out.

“I love being part of something bigger than myself,” she said. “And [I love] getting the chance to step into someone else’s shoes, which is honestly the most amazing thing about theatre.”

All in all, Beach feels excited about how their performance will go. “I want people to laugh, and enjoy themselves,” she said. “I’m excited! I can’t wait to see how it goes.”

The one-acts will be held on Jan 31 and Feb 1 in the auditorium. Everybody is welcome and encouraged to attend.