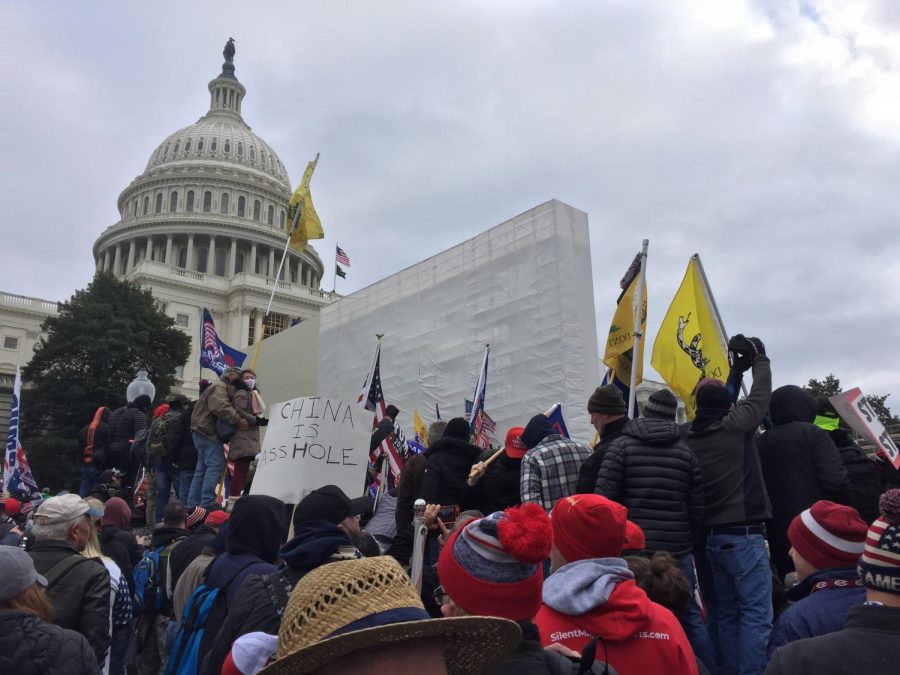 Trump supporters, white supremacists, conspiracists attempt coup to overturn election results
Jan 6, 2021 marks what some experts are calling “the most severe assault on the Capitol since the British sacked the building in 1814” [Washington Post]. Donald Trump, the 45th president of the United States, called on his most loyal supporters to take action against the “fraudulent” election results he claims corrupted the 2020 presidential run.

As hundreds of lawsuits claiming voter fraud were either dropped by the administration or thrown out of court, Trump has been desperate to find any way to hold his position as Commander-in-Chief for another four years. He began pushing Jan 6 -the day Congress affirms Biden’s presidential win- as the time he and his followers would take back an election that was vehemently stolen from them: a belief that was proven over and over again to be false.

The insurrection began with a speech delivered by Trump outside of the White House. According to VOX, Trump used the words ‘fight’ or ‘fighting’ at least 20 times throughout the course of his address. “You are going to have to fight much harder,” said Trump. “…You’ll never take our country with weakness… You have to show strength, and you have to be strong.”

His Audience came equipped with both American and Confederate flags, marking a contradiction of values that his followers held throughout his presidency. Trump loyalists were also spotted wearing ‘Camp Auschwitz’ sweatshirts, as well as shirts that read ‘MAGA: Civil War- January 6, 2021’.

The conclusion of the speech initiated a mob of Trump Supports heading straight towards Capitol Hill. Chanting “Stop the Steal”, hundreds of rioters began climbing the walls of the Capitol building; successfully swarming the area and forcing congressional members and those inside to go into lockdown. Rioters then breached police gates, assaulted police officers, smashed windows, and made their way inside the building [Washington Post].

Congress, as well as Vice President Mike Pence, were forced to evacuate the building at this time.

In lieu of Trump’s silence regarding the escalated events, President- Elect Joe Biden demanded an end to the violence. “At this hour, our democracy is under unprecedented assault,” said Biden. “I call on President Trump to go on national television now, to fulfill his oath and defend the Constitution and demand an end to this siege.”

Trump delivered a statement to his Twitter page hours into the riot, while continuing to hold on to the conspiracy of a stolen election. “This was a fraudulent election, but we can’t play into the hands of these people. We have to have peace. So go home. We love you; you are very special,” as told by Business Insider.

The riot dispersed at sundown with the district’s curfew mandate going into effect. The District of Columbia National Guard was mobilized, but the decision was made largely by Pence, as Trump was hesitant to make the call [CNN].

The damage to Capitol Hill was immeasurable. Bullet holes, shattered glass, ransacked offices, and stolen items were all left in the wake of the attack [NBC News].

Politicians on both sides of the aisle have condemned the events, as well as the President for his lack of response during the siege. “The United States will not be intimidated,” said Republican Senate Majority Leader Mitch McConnell. “We will not be kept out of our chamber by thugs, mobs, or threats… They tried to disrupt our democracy. They failed.”

Activists are pointing out the strong difference in police response to the Capitol Hill Riot compared to the Black Lives Matter protests of this past Summer. “We were tear gassed, shot with rubber bullets, and murdered for peacefully protesting for black lives,” wrote writer and advocate Frederick Joseph. “Trump Supporters are literally in the U.S. Capital attacking police and storming buildings because their candidate lost, yet being treated better: Two Americas.”

Many Democratic congressional members, as well as some Republicans, are demanding Pence enact the 25th Amendment and remove Trump from his Presidential powers. The Amendment was made to the Constitution in 1789, and states that a congressional vote would allow the Vice President to become acting President if the current is unable to do their job.

As per the New York Times, Pence is believed to oppose the idea of enforcing the Amendment. Read more about what Congress is doing to hold the President accountable in our Managing Editor, Yana Arora’s article here.

Five deaths occured at the riot, including a woman shot by police and an officer who died from blunt force trauma to the head [CNN]. The events at the capitol were not a result of heat-of-the-moment mob mentality. This was a blatant threat to our democracy that undermines the core values of liberty and justice that our country claims to have built its foundation on.