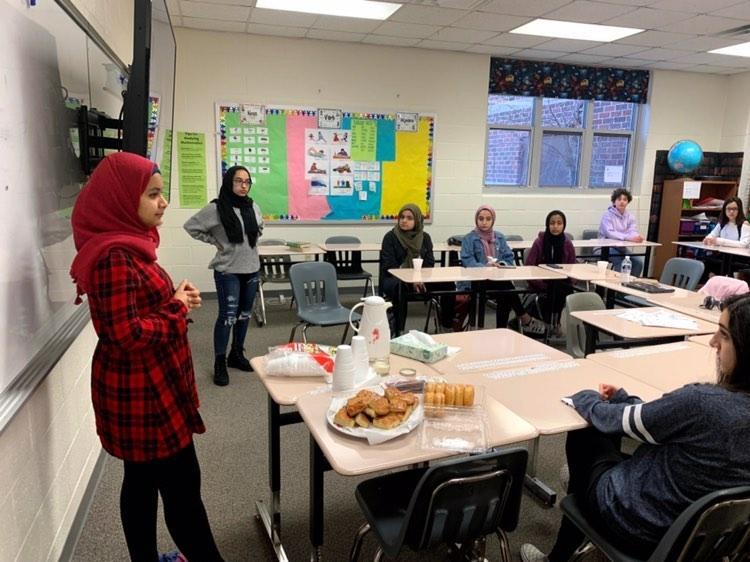 Middle Eastern Club officers give us a look into their club — sharing details about meetings, starting the club, and even the effects distance learning has had on the club.
Last school year during Study Hall, sophomore Homira Koraganie was approached by her then-teacher, Ms. Abedian, who wondered if Koraganie would like to form a club about the Middle East and embracing Middle Eastern culture. Sophomore and club secretary Saba Banaii also had an analogous encounter with the current Middle Eastern Club sponsor. “Last year, Ms. Abedian, who taught study hall in Mr. Flynn’s room, and I got to talking, as it was nice to relate to a teacher with the same ethnic background. She talked to me about starting a club where Middle Eastern students could learn more, come together, etc.” said Banaii.

Koraganie, the current Middle Eastern Club President, worked alongside the club’s other officers to create an environment where Middle Eastern students can share their cultures, come together, and teach one another about their own cultures and personal experiences. “The Middle East is a huge region and is made up of so many different countries, with MEC we get to know more about each country. We get to get a feel for how each country feels like someone’s home or home away from home,” said Banaii.

The most disquisitive question is, how has distance learning changed the way the club runs? Junior and club Vice President Laith Shakir renders his perspective on the matter: “It definitely had a huge impact on how we run our meetings. The actual transition itself hit all the clubs at [Potomac Falls] hard, as we all had to temporarily close down our club and open up later than usual. Some of the activities that we would do in-person, such as socializing with one another and eating [and] drinking ethnic foods [and] drinks weren’t possible anymore either. However, I think we definitely dealt with it in a great way after everything calmed down, since we adjusted to the distance-learning lifestyle and found out what works best and what doesn’t.”

Sophomore and club Treasurer Farah Al Asadi also shared, “Distance learning has made us change things around a bit. Instead of our usual meetings involving food and conversation, we have to find other ways to keep the meetings fun and entertaining. We do this by encouraging people to participate and making sure we have fun activities planned out for the entire meeting.”

An ordinary meeting for the club usually consists of a kahoot game followed by a shared presentation about a Middle Eastern country made by someone in the club, as told by Koraganie. “Last year, we’d bring food to every meeting, but this year we obviously can’t. This year, we had one meeting where the officers did a show and tell, then a member did a presentation about a country. Farah [Al Asadi], the treasurer, also showed photos from Iraq, which were really cool.”

For only being around a year and a half, the Middle Eastern Club has opened doors to many Middle Eastern students, giving them the opportunity to meet and bond with others that share similar ethnic backgrounds, some of whom they might have never met otherwise. “[The] Most exciting thing is definitely seeing how many people show up and their words of encouragement at the end of the meetings. It’s great to see how much the club has grown and affected people,” said Shakir.