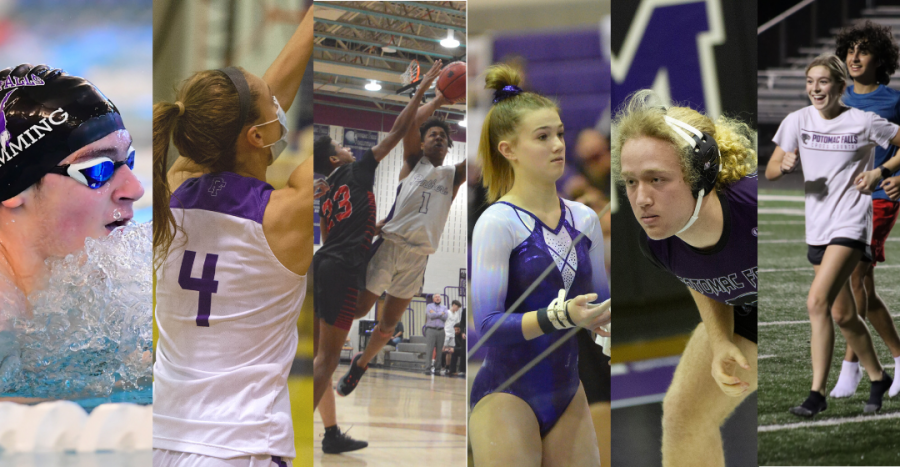 A look at what to expect from PFHS varsity teams this winter
With winter sports underway, athletes are looking forward to their seasons. Each team has been training hard to show themselves and the rest of the school just how far they can go.

Returning from a strong season with a 15-6 record, including the regional champion title, and district champion title the season before, the varsity girls basketball team is looking to go even farther this season. “I think this season we will do pretty well, win some and lose some games. We graduated a lot of starters and height, so we had to adjust to a more quick pace and forcing turnovers game style,” said senior Amy Miller, returning varsity player.

The girls opened their season with back to back wins against Freedom, 45-33, led by seniors Julia Hoffman and Olivia Duhaime, and sophomore Meagan Njamen all with 8 points, and Rock Ridge, 55-30, led by Njamen with 15 points and 16 rebounds.

The varsity boys basketball team is working on improving their record and having a more successful season than last year where they went 8-9. Graduating five seniors, the team has filled the spots and is ready for anything coming their way. Senior Kyle Ables has played on varsity since sophomore year and hopes to be a dominant force this season.

“[This year I think] we will do much better than last year. We lost a few key pieces from last year’s team, but we got new important roles. [I want to] make it far into regionals and hopefully states, and for me to help be a leader on the team,” said Ables.

Playing on the court with Ables is Johnny Opiola, one of the three sophomores on the varsity team. Opiola is striving to be a rising key player on the team, with the unique opportunity to play with his senior older brother, Justin, motivating him on court.

“My brother is one of my best friends and pushes me everyday. We compete everyday and he tells me how much of a terrible job I’m doing or how great of a job I’m doing. We train together and he pushes me to my max,” said Johnny.

The boys team also opened their season with back to back wins against Freedom, 48-20, led by junior Eli Adegberno with 15 points and Kyle Ables with 9 points, and against Rock Ridge, 49-38, led by Adegerno with 13 points and 12 rebounds, and senior Mitch Laurenson with 10 points and 7 rebounds.

While basketball is refining their teams, there’s a new varsity sport making its way into the winter season. With about three dozen people on the team and five meets, many runners are using winter track to stay in shape between cross country and spring track, including junior Caroline Sagen. Sagen was a top runner on the girls varsity cross country team and has high expectations for using winter track as a way to train for the spring season.

“My biggest goal for the upcoming season is to lower my 3200 (2 mile) and 1600 (1 mile) times. My goals are challenging, but I believe that I can hit them with the support from my teammates and coaches. I plan on accomplishing this goal by working with my coaches and fixing my running form, which will cut down my time and prevent injuries,” said Sagen. “Setting goals for myself motivates me to compete. I didn’t hit all my goals for cross country this year, so I am focusing on training during the winter. This will prepare me for the spring season.”

The swim teams have high hopes for this season. Last season, they sent eight athletes to states, including seniors Daniel Pappalardo, Jimmy Anderson, MaryAnna Nguyen, and sophomore Carter Hendershot. Senior Tess Durham, captain and returning varsity swimmer, hopes that the underclassmen turn out will help them out this year due to the graduated seniors.

“This season our team will probably do a little better because we have a huge freshman and sophomore turn out this year. At least half of the team is new and they’re all good so that’ll definitely make the team better. We did lose really good swimmers last year so the big turn out will make up for it,” said Durham.

The varsity boys wrestling team has high standards for this season as well. Gavin Hunter, senior and co-captain, is in recovery from an ACL injury, but it’s not stopping him from being a leader on the wrestling team for his last season. “I think this year’s team is going to be really fun to watch. We have been building every year, and I think this will be the peak of all that hard work,” said Hunter.

Hunter had a strong wrestling career throughout high school, including placing at regions with three pins in the JV Jamboree at Independence High School. “I want to give the newer guys as much advice as I can because I won’t be able to actually wrestle but I want to leave the program in the best position possible,” said Hunter.

Due to graduating three seniors and three others stepping away from the sport, the gymnasts can only compete as individuals this season as they don’t have enough athletes to qualify for team events. “I do believe each one of my teammates will pull their weight and do great this season,” said sophomore Jaelyn Hawes.

The team practices 4-5 times a week for two hours each day to prepare for their meets including their first meet on Monday, Dec 13, against Tuscarora, John Champe, Loudoun Valley, and Rock Ridge. “Mentally this sport is so difficult, you really have to know you’re going to do well and be positive to succeed in gymnastics. Physically gymnastics is so hard on your muscles, and I am sore most of the time,” said Hawes.