Slava Ukraini: Seven Ways to Support the Ukrainian Diaspora in the DMV 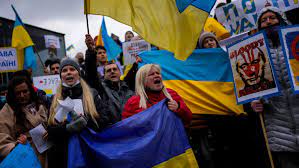 “Slava UkraiSlava Ukraini: Seven Ways to Support the Ukrainian Diaspora in the DMVni”, which translates to Glory to Ukraine, is a symbol of Ukrainian sovereignty and resistance. During a time where two million refugees have already fled Ukraine and cities are being bombed to the point of complete destruction, many want to finance causes that aid Ukrainians, but are often confused on how to support Ukrainian independence. Supporting the Ukrainian diaspora is key to backing the Ukrainian fight.

1. Putting Your Money Where Your Mouth Is

D Light Cafe is a European-inspired cafe-bakery-lounge owned by two Ukrainian sisters Vira and Anastasiia Derun. Located in the Adams Morgan district in Washington D.C., the menu features an array of carefully crafted dishes. Some examples are ‘kasha’ which is an Eastern European term for a cooked grain dish, chocolate cherry pistachio kielbasa, and a drink called ‘Nutty Raf’ that has a latte-like consistency. Proceeds currently are going toward helping Ukrainian relief efforts.
SpacyCloud is a Eastern European Vegan restaurant also located in the Adams Morgan District in D.C. The menu includes dishes from Ukraine, such as traditional Ukrainian dumplings called ‘Vareniki’.
Tabla and Dacha’s Beer Garden in D.C. are not Ukrainian, but both are examples of restaurants that are using their proceeds to donate to Ukrainian Relief efforts.

2. Shining A Spotlight On Ukrainian Art

The Ukrainian Embassy launched the Ukraine House to promote Ukrainian culture in the US in 2016. It is a cultural center where people can admire Ukrainian heritage, while raising awareness about Ukraine’s geopolitical conflict with Russia. There is a current exhibition of workers from 17 Ukrainian artists in honor of the Euromaidan protests in 2014. The exhibition is open to the public, but prior registration is required by emailing [email protected].

3. Say No to Spreading Misinformation

There have been numerous false reports regarding the conflict between Ukraine and Russia. A video showing a girl facing off with a soldier recently went viral on social media, with users praising the girl for her bravery in fighting for Ukrainian sovereignty. However, the video was a couple of years old and the girl in the video a Palestinian who was arguing against an Israeli soldier. Never share a social media post without fact checking.

Check credentials of the author. Use LinkedIn or Google to see if the author can speak on the subject with credibility and accuracy.
Does the source have an ‘About Us’ section? Reputable websites will often have that section included.
Look for bias. Does the author tend to lean toward a particular point of view? Does it link to other articles that also seem to pick a position in the issue? Biased articles will most likely not give you the full story.

4. Chip In To Help Ukrainians On The Front Lines

United Help Ukraine is a non-profit organization that was started after Russia invaded Crimea in 2014. They focus on four areas: providing medical supplies, personal protective, medical & survival equipment, humanitarian aid, and raising awareness. They are now raising funds to provide first aid kits and other emergency supplies for those directly impacted by Russian attacks. Donations can be made here: https://unitedhelpukraine.org/donate

5. Exercising Your Freedom of Speech

Protest in front of the Russian Embassy or the White House to pressure political leaders in going further to support Ukrainian sovereignty. Protesting works if enough people to join. United Help Ukraine is an example of an organization that plans peaceful protests and encourages those interested to sign up. https://www.facebook.com/pg/UnitedHelpUkraine.org/events/

6. Honor Those Lost In The War

Between 400 and 2,000 civilians are thought to have been killed in the war thus far, according to the Ukrainian government. However, these numbers have been disputed, with the United Nations estimating a higher toll. People can demand Ukraine’s independence, but also take time to honor those who have fallen. A vigil that was held last Sunday at Lafayette Square commemorated the memory of the deceased, while also honoring those who are currently defending Ukraine.

Boycotting Russian goods and services has become the trend now, with several companies severing ties with the Kremlin. The sanctions also imposed by Russia by Western countries will deteriorate the Russian economy, as already shown with Fortnite money being worth more than the Russian ruble. These sanctions hurt the Russian working class more than they do the politicians. While it is incredibly important to deny President Vladimir Putin’s ludicrous claims of neo-Nazis infiltrating the Ukrainian government, it is also important to realize that Russians did not choose war. Educate those who believe in Putin’s lies.