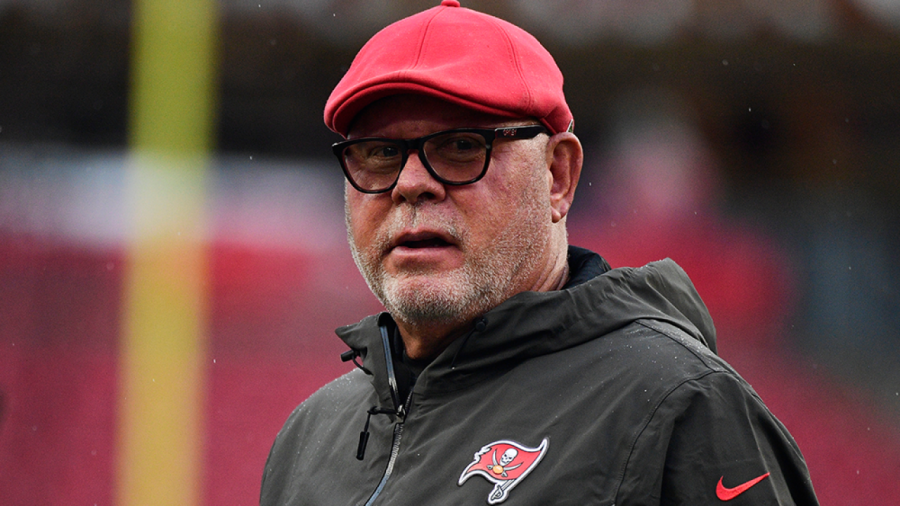 Arians will remain in the team’s front office while Todd Bowles will take over as Head Coach.
Bruce Arians, head coach of the Tampa Bay Buccaneers, announced that he will step down as head coach of the team and will move into a Senior Football Consultant position with the organization, which was first reported by Peter King of NBC Sports on Mar 30. To take his place as head coach will be Defensive Coordinator Todd Bowles, who was the head coach of the New York Jets from 2015 to 2018.

Bruce Arians spent three seasons as head coach for Tampa Bay with a 31-18 record, according to Pro Football Reference, and led Tampa Bay to a win in Super Bowl LV, 31-9 over the Kansas City Chiefs. Arians said in a statement on the Buccaneers website that he felt comfortable retiring from coaching after winning his first Super Bowl in 2021. “So why now? The simple answer is that I have accomplished more than I ever dreamed I could during this incredible coaching journey. Winning Super Bowl LV at our home stadium, with my mom and family in attendance, was really the last item I wanted to check off my career bucket list,”

Arians also said he felt comfortable with the state of the team, and handing off the coaching job to Bowles. “I wanted to ensure when I walked away that Todd Bowles would have the best opportunity to succeed. So many head coaches come into situations where they are set up for failure, and I didn’t want that for Todd.” Arians also stated that quarterback Tom Brady’s unretirement made his decision easier. “Tom’s decision to come back, along with [General Manager] Jason [Licht] and his staff doing another great job of keeping the core of this team intact during free agency, confirmed for me that it was the right time to pass the torch to Todd.”

Todd Bowles was grateful to accept the head coaching position. “I am appreciative of the Glazer family and Jason Licht for having faith in me to take on this role, and to Coach Arians for his support and guidance over the past four decades.” Bowles said he is ready to take over for a team with two straight playoff appearances. “I am eager to get started with our players, coaching staff, and front office in preparation for the 2022 season,” Bowles said in a statement on the Buccaneers website.

Quarterback Tom Brady posted a statement on Instagram thanking Arians for his support and coaching. “Thank you, BA for all that you have done for me and our team. You are an incredible man and coach, and it was a privilege to play for you.” Brady noted Arians’ impact on his work to change the NFL’s still-relevant diversity problem in coaching. “You are a true NFL legend and pioneer for all the work you have done to make the league more diverse and inclusive… I’m so happy you will spend the much-deserved time with your loving and supportive family that has given so much to our communities.”

Brady reflected on Arians’ impact on him when he first came to Tampa Bay after 20 seasons with the New England Patriots. “Congratulations on an amazing coaching career but more importantly, how you positively impacted me and everyone else in the game of football.” In his first season with Tampa Bay, Brady won his 7th Super Bowl Championship, which is more than any NFL franchise.

Bruce Arians retired as a two-time AP Coach of the Year, winning the award in 2012 with the Indianapolis Colts and in 2014 with the Arizona Cardinals. He will end his coaching career with a record of 86-51, as well as one Super Bowl win.